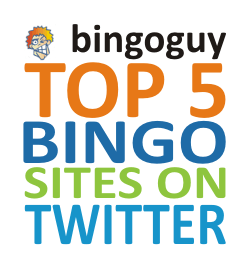 Twitter is an online social networking service and that enables users to send and read messages of up to 140 characters. If you are not a Twitter user then you may not know how popular it is. It is a great way to spread your message to your followers or fans. Online bingo sites have taken on social media to communicate and interact with their bingo players. We have researched all the top bingo sites and their Twitter accounts and we would like to present to you the Top 5 Bingo Sites on Twitter.

For our measurement of the top sites, we have considered how many followers they have which shows their popularity and how many tweets they have made. The more tweets mean the more that they interact with their followers which increases their influence.

If you use Twitter and want to follow one of the most popular bingo sites then check out CyberBingo.

If are a bingo player from the UK and use Twitter then you should think about following Jackpotjoy.

Chicthat Bingo is a very friendly bingo site and you can see that by the number of followers they have on Twitter. This is a great UK bingo site where the chat room is always buzzing. The Chitchat Bingo Twitter account shows the following stats:

If you like to chat while you play bingo and you are from the UK then check out the Twitter page for Chitchat Bingo.

Wink Bingo is one of the big players in UK bingo. It is a fun place to play and you can keep up on all the happenings with their Twitter account. The Wink Bingo Twitter account shows the following stats:

For an exciting UK bingo site with great jackpots check out the Wink Bingo Twitter account for details.

Bingo Angels is a very popular bingo site for bingo players from around the world. There is always something fun going on and they are always sending out new tweets to keep everyone up to date. The Bingo Angels Twitter account shows the following stats:

There were a few other bingo sites that could have made it into our Top 5 Bingo Sites on Twitter, but they have not been active recently so we have not included them. If you would like to keep up on all the latest bingo news and promotions then you can also follow Bingoguy Twitter account. We hope that you have enjoyed this article on the top 5 bingo sites on Twitter and please feel free to comment or share.